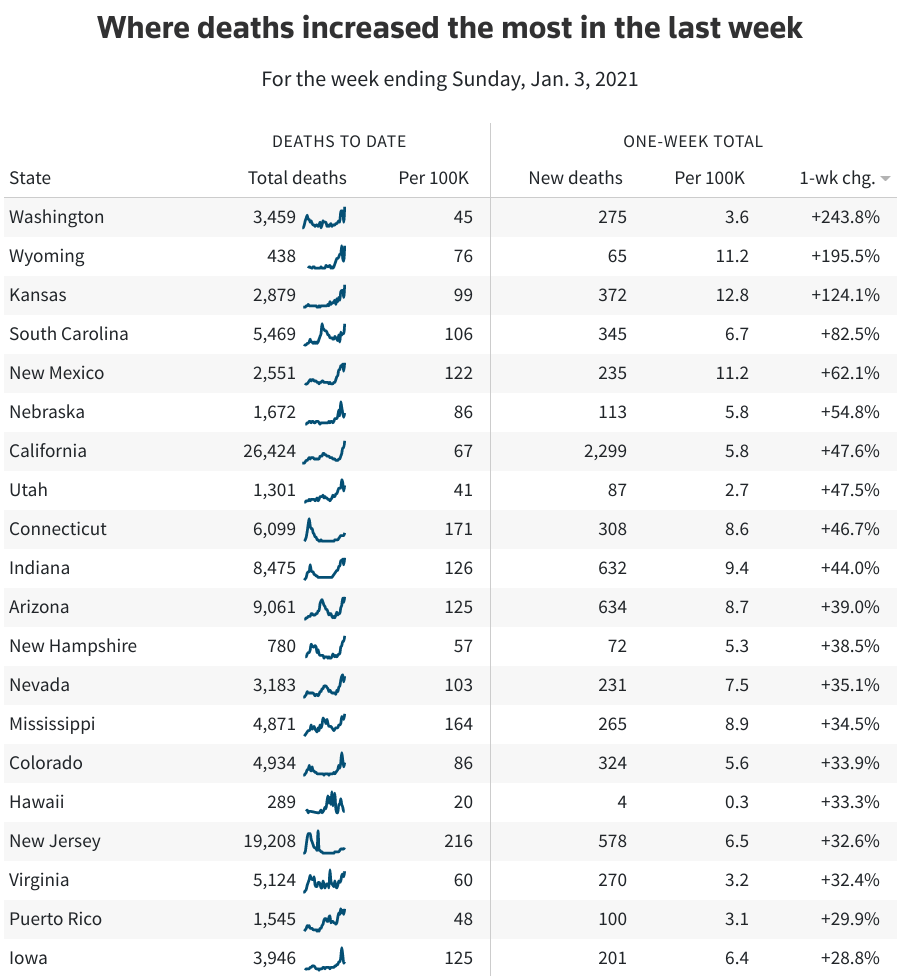 Image source: Reuters​
(Reuters) - December was the deadliest month of the coronavirus pandemic in the United States with nearly 78,000 deaths, and health officials warned that even more people will likely die in January despite the rollout of vaccines.

In the week ended Jan. 3, more than 18,400 people died from COVID-19, bringing the pandemic’s total to over 351,000 deaths, or one in every 930 U.S. residents, according to a Reuters analysis of state and county reports.

Many testing centers were closed for the year-end holiday, likely reducing the number of cases reported last week. Health officials have warned that figures this week may be abnormally high due to a backlog of data.

More than 126,000 COVID-19 patients are currently in hospitals, up 25% from one month ago. The rise in hospitalizations, which have hit new records almost every day in recent weeks, is the main reason health experts predict further increases in deaths in coming weeks.

Despite pleas to avoid traveling for the holidays, U.S. airports screened 1.3 million people on Sunday, the highest since mid-March.

Arizona, Tennessee and South Carolina reported the most new cases per capita last week, according to the Reuters analysis. In terms of deaths per capita, Kansas, Wyoming and New Mexico were the hardest hit last week.

Across the United States, 13.6% of tests came back positive for the virus, up from 10.3% the prior week, according to data from the volunteer-run COVID Tracking Project. The highest rates were in Iowa at 64%, Idaho at 56% and Alabama at 47%.

The World Health Organization considers positive test rates above 5% concerning because it suggests there are more cases in the community that have not yet been uncovered.